Note: Diverse Customer does not support either Trump or Kim Jong-un. But we love Madame Tussauds and Singapore, as well the #PeaceSummit aka #TrumpKimSummit because we endorse peace and development over malice and bigotry.

The world famous attraction is located at Imbiah Lookout, only 15 minutes walk from the hotel where the summit took place. Besides music celebrities, Super Heroes, movie stars and sports legends, guests can meet leaders from around the world. Watch the video to check out the reactions of the guests when they saw the figure of Kim Jong-un.

With more than 35 of the world's media outlets live-streaming on Twitter as a sitting US President and a North Korean leader met for the first time in history, and nearly 4 million Tweets shared from 1 June when the Summit was confirmed to 13 June the day after the event, the world watched and talked about the #TrumpKimSummit on Twitter.

From political leaders to journalists, experts to citizens across the world, Twitter was the only platform where you could see every side of the #USNorthKoreaSummit and to talk about the event - to get a wide range of perspectives, to get a more informed point of view, and to engage with content and conversations at the same time.

Below is a global heatmap showing the live Twitter reaction on the day of the #TrumpKimSummit on 12 June.

This global conversation peaked at 9am SGT on 12 June with 5,200 Tweets per minute as President Trump and Chairman Kim shook hands. 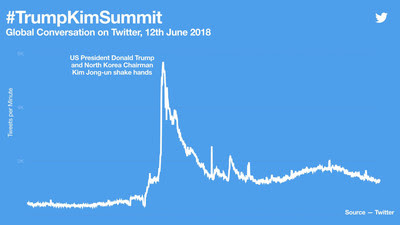 With two LIVE Blue Rooms, news partners also demonstrated that Twitter is the place to innovate and reach an engaged audience.

News partners around the world also created Moments to tell the story of the Summit and how the conversation and commentary unfolded.

From experts live-Tweeting their analysis and observations, to people on the Korean Peninsular joining the conversation, Twitter again demonstrated that it is one of the the best ways to see what's happening and to talk about it . Now, with a joint statement signed by the two leaders and the world waiting to see what happens next, Twitter will be the place to continue the conversation and keep track as news breaks on the Korean Peninsular or anywhere in the world.