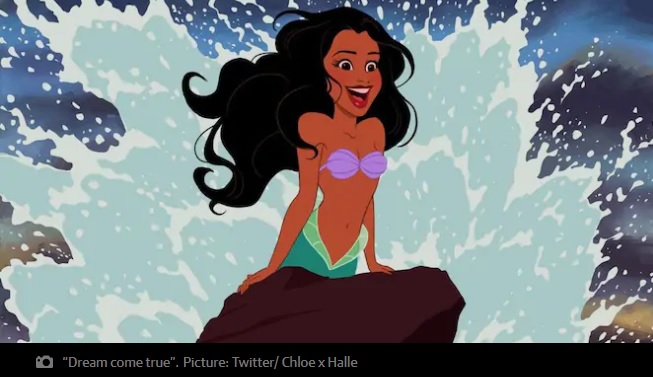 Picture Credits: Chloe x Halle/ Twitter (Public Platform), Used under "Fair Use" for News purpose
Historically, Disney had most of their princesses as demure damsels in distress. I wasn't a big fan of that old Disney franchise. But I am a fan now because Disney has been changing over the years. For every Elsa, there is also Jasmine, Pocahontas, Mulan, and Princess Tiana. So that's all pretty cool. However, the princesses are no longer naive which is refreshing to see. Plus, there has been a conscious effort on part of the company to adopt inclusion within its core addressing the diversity across entertainment and media. Especially, when it comes to assigning leading roles to people of color that were once reserved only for white characters and are reinventing the art of storytelling and bringing people together from a wide racial diaspora.

There is seemingly a huge outrage about this topic. Let me revisit #NotMyAriel because some folks seem to believe that this push for racial equality is not constructive and trying too hard to color the white canvas that we have been used to seeing as the default on screen in addition to erasing the memory of an iconic character because of the new adaption and commitment to racial equality bringing in more representation on screen. Are people missing the point here that it’s not about being black or white. It’s just about a mermaid? Is there evidence that afro mermaids don't exist? I know there is still residual stupidity and racism but should fiction and fantasy be even color categorized?

I have the benefit of traveling constantly around the world, and I have seen first-hand racism, sexism, religious discrimination, ethnic discrimination...even in the complete absence of white people. This isn't really about white or black. Great stories don't see color. Disney has realized it and I believe so should people who are divided about it for no apparent reason.

I've seen the same argument over Idris Elba and 007. The James Bond franchise should have let itself go in a new direction, but they didn’t. I now hear that is also changing and the 007 may go Ghostbusters (2016) and Ocean's 8 way:

Change is refreshing. Then, why are we struggling to embrace it?