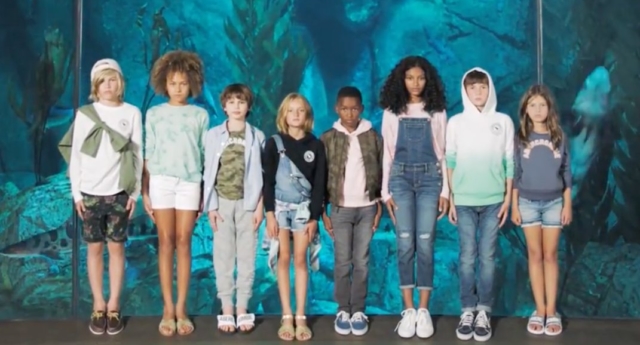 Not so long ago, Abercrombie and Fitch banned their models from going shirtless and flaunting their perfect six-packs and V-tapers. The once controversial retailer decided to bet on the quality and diversity of its merchandise as opposed to relying on sexualization of its employees to sell clothes in-store and at brand events.

Diverse customer is proud of the retailer's efforts in keeping up with their commitment to rebrand as it continues to jostle out of declining sales and obscurity.

Abercrombie & Fitch has launched a gender-neutral children’s clothing line. The line, called “Everybody,” is for every kind of child, the company has claimed. ﻿

Just a couple of weeks we posted a similar feat of inclusiveness by John Lewis with the introduction of ‘gender neutral’ labels on children’s clothing, that too, invited a lot of flak.

It is unfortunate that these highly progressive stances on ditching reinforcing "gender stereotypes" have met with such regressive tirade.

Continuing the fairy tale flavouring, Once upon a time, there were only two sexes, male or female. Anything in between was considered too inessential to warrant a categorization. Thankfully, we are out of the dark ages but the shadows still lurch about here and there that denies the parallel lifestyle of today's men and women who want their clothing choices to be able to perform and reflect that confluence.

The "nouveau sexist" and the "cisgenderist" (or people who have to be gender specific all the time) might be having a field day labelling any form of gender neutrality as a passing trend, trolling, denying and abusing anything that doesn’t fit their norm of normalness but there is already a sensibility of duality, plurality, androgyny, unisexualism in existence, in full force now, and in the process creating a whole new customer identity, shedding traditional stereotypes and social constructs of male and female.

We strongly believe, as gender norms continue to loosen, regardless of sexual orientation and categorization, almost everything concerning gender perception of femininity and machismo has gone into a constant state of influx and evolution, and inadvertently has become an agent of change - forming a spectrum of gender dichotomy that is fluid and ever evolving.


Neutrality is becoming a crucial element in the modern liberal notion of inclusion, diversity and equality.